An angular sofa , armchair and coffee table feature across all of the sub-collections, variously supplemented with a matching side table and ottoman, a cylindrical floor and table lamp as well as a range of different home accessories .

Although the overall shape of the pieces remains the same across all the Unusual Living Rooms , each series is accentuated with a different pattern .

These are based on recently discovered drawings from the brand's late founder Piero Fornasetti , described by his son and Fornasetti heir Barnaba as capturing "that lightness of his that was never sentimental".

All five collections are currently on show at the VDF products fair, which offers brands and designers an affordable platform for launching new products in the face of the ongoing pandemic . Facciata Quattrocentesca's geometric pattern is either rendered in black and white or ochre yellow

These are adorned with a graphic print of triangles and arches, offset against the accessories' gold brass details and the bright turquoise legs of the couch and tables .

Leopardo sees its namesake animal emblazoned onto the sofa's backrest, where it is depicted peeking out from among the leafy undergrowth that also graces the remaining pieces in the collection.

This series embodies "faraway stories and echoes of travel", an effect that is amplified by painting the legs and armrests of the furniture pieces to resemble cane stalks.

Both Sole A Ventaglio and Solitario feature illustrations of suns donning human faces.

In the former, they are surrounded by radiating, monochrome patterns similar to optical illusions and contrasted against the furniture's yellow metal framework and the magazine stand's metallic feet.

Solitario features more organic, sketchy lines alongside anthropomorphic stars and moons, which can even be found on the frames of the square and round mirrors that finish off the collection.

Finally, Malachite is perhaps the most colourful series, drenched in the deep green shade of its titular semi-precious stone.

Its internal patterns resemble the rings of a tree or a human fingerprint, and are splayed across the pieces to form a hypnotic, repetitive print.

Fornasetti's ongoing collaboration with the Virtual Design Festival has previously seen Barnaba Fornasetti take part in a live interview as well as giving viewers a video tour of the brand's new Milan showroom. 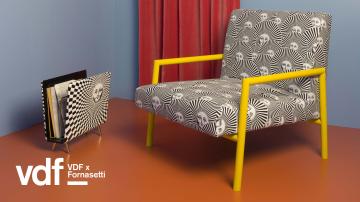