British sculptor Jason deCaires Taylor has sunk the Coral Greenhouse to the seabed in Australia so its cement and steel frame can be a habitat for marine life.

Created as part of the Museum of Underwater Art , the Coral Greenhouse sits in the Great Barrier Reef Marine Park on the John Brewer Reef. It is located 50 miles from Townsville, a coastal city in the Australian state of Queensland. Photo by Richard Woodgett

Positioned in an inlet of the natural reef, the Coral Greenhouse is full of sculptures of trees and people.

Instead of glass, water fills the space between the ribs of the underwater architecture. Spire-shaped elements attached with zinc anodes to the apex of the roof oscillate in the waves. Photo by Richard Woodgett

DeCaires Taylor created sculptures of workbenches filled with gardening tools inside the sunken pavilion, which are each designed to be a refuge for different species of wildlife.

Small fish can escape predators by hiding in the gaps of gridded elements, and there are niches for octopus and sea urchins to hide in.

Above, the beams of the Coral Greenhouse are designed to be a convenient place for fish and crustaceans to feed or congregate about in shoals.

Weighing 165 tonnes, the skeletal structure is anchored to the sandy bottom by its heavy base and has integrated cyclone tethers to protect it during storms. Its triangular structure is designed to give it a low centre of gravity.

"The design of the greenhouse is biomorphic, its form determined by the forces of nature," said DeCaires Taylor.

"As the Coral Greenhouse is slowly colonised and built upon by the reef, it will be gradually absorbed into its surroundings."

Stainless steel, pH-neutral cement and zinc were chosen as materials that will encourage coral to grow in and around the structure. Planters filled with real coral, propagated for the artwork, surround the Coral Greenhouse.

Divers and snorkelers can access the sculpture garden easily by swimming down and using the three entrance points to the sunken pavilion. There are two-metre-wide gaps either end, and an arched doorway at the centre.

Visitors can rest inside the Coral Greenhouse and observe the wildlife and the artworks.

DeCaires Taylor modelled the trees on local Australian plants, such as eucalyptus and umbrella palm. The sculptures of children engaged in science and conversation work were modelled on real children from schools around the world.

"The children study and tend to planted coral cuttings," said DeCaires Taylor. "Thus they are tending to their future, building a different relationship with our marine world, one which recognises it as precious, fragile, and in need of protection."

Its coral reef system is the largest structure in the world made by living organisms, but rising sea temperatures caused by climate change are causing increasingly frequent mass coral bleaching events .

"Our vision is to inspire reef and ocean conservation action and achieve positive environmental outcomes. The Coral Greenhouse will do that by reducing pressure on the reef environment," said deCaires Taylor.

"We hope to advance education and offer opportunities for scientists, marine students and tourists to engage in action-based learning and and conduct globally important research on coral reef restoration and new technology."

Using data collected from the Davies Reef weather station, the LED display covering half of the sculpture changes colour according to the sea temperature around the reef.

Powered by solar panels, Ocean Siren's lights act as a warning for the environmental threat of warming waters stressing the nearby reefs.

Designers have been responding to the threats posed to coral for many years now. In 2015, Australian designer Alex Goad created a Lego-style system of modular structures that could help restore damaged coral reefs.

Last year, Australian design studio Jack and Huei called out Pantone for choosing Living Coral as their colour of the year by hijacking their branding and applying it to a colour they called Bleached Coral .

Photography is by Jason deCaires Taylor unless otherwise stated. 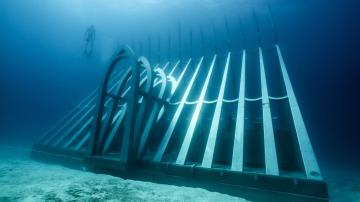