French studio Tracks Architectes has built a cinema fronted by an irregular arched colonnade in the grounds of a former convent in the town of Riom, central France.

Arcadia Cinema at Riom forms part of the conversion of the Redemptoristine convent into the Jardin de la Culture cultural centre near the historic centre of the town.

Tracks Architectes designed the multi-screen cinema as the first stage of the conversion, which will also include a multimedia library built alongside it and a music school built in the former convent building and an exhibition hall in the chapel.

However, unlike the regular sized arches that break the wall, the arched openings that support the cinema's facade are three different sizes arranged in an irregular pattern. To add to the irregularity the arches turn the corner at the building's edges to create a larger opening.

"The arches were inspired by the rich history of the site of the convent of the Redemptoristines," explained Moïse Boucherie, partner at Tracks.

"We borrowed this element of architectural vocabulary from existing structures and then gave it a contemporary interpretation," he told Dezeen.

"The design concept was to create a building that was open toward the green spaces of the garden of culture and the existing convent," continued Boucherie.

"Indeed a cinema programme imposes dark rooms and we tried to create a generously open and welcoming space functioning at night as 'light signal'."

Beyond the colonnade is a large barrel-vault shaped reception hall that leads to three cinema screens and a conference room.

In total, the cinema's have 543 seats, while the conference facility seats 112.

Paris-based Tracks Architectes is led by partners Boucherie and Jérémy Griffon. The studio previously designed a honey-coloured in the village of village of Perthes-en-Gatinais in France .

Photography is by Guillaume Amat. 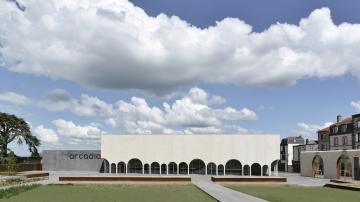