In the first lecture from today's collaboration with Architects, not Architecture, Norwegian architect Reiulf Ramstad discusses his background and how he originally wanted to become a dancer, not an architect.

Ramstad, founder of Oslo studio Reiulf Ramstad Arkitekter, spoke of how growing up with an architect made him want to chose a different career for himself.

"I saw all her depressions with difficult clients, bad economy, too stressed, too much work, quarrelling with my father and not having time with the children. So I wanted to become a dancer," he continued

"But at a certain point I understood it was not for me, even though today I still love dancing."

The concept of Architects, not Architecture is for architects to talk about their path, their influences and experiences, rather than about their projects.

Ramstad, whose studio is set to create a plant-covered tower in Oslo, explained that growing up close to nature in Norway has had a lasting impact on his life.

"Even if we didn't have much wealth we had this enormous closeness to nature, so we grew up in the city but from your house you could go out and ski in the woods," said Ramstad.

Living in Venice for ten years also informed Ramstad's work. "What I discovered in Venice is actually that my architectural education is more from the spaces and the streets."

"I learned so much about the rules that we have for architecture in Norway -- everything is forbidden that's shown in Venice, you would have been put in jail if you designed Venice in Norway," he continued.

"But the dimensions and the way of living really made an impact on me."

The architect spoke of a bad car accident, which left him temporarily unable to use his legs, as a humbling experience. It led to him rediscovering art, which he believes we need now more than ever.

"We need to explore our senses. Technology and science can be rational, but doesn't show us the way," Ramstaid said.

"We need much more empathy in the world. Towards each other and towards the environment and towards other living creatures."

Instead, Ramstad believes regulations in cities need to change. "We need to learn from Venice, we need to walk to work," he said.

"We need to find, in our daily life, everything that we need and desire within five to ten minutes."

Among Reiulf Ramstad Arkitekter's recent projects are a number of Corten steel structures along the Chemin des Carrières trail, and two residences in timber-and-glass boxes on a Norwegian hillside.

Architects, not Architecture is a lecture series founded by Fermin Tribaldos and Irene Osei-Poku in 2015 in Hamburg, Germany. For each event they invite three well-known architects who, instead of talking about their award-winning international projects, are asked to talk about themselves.

As a consequence of Covid-19, Architects, not Architecture has introduced its Home Edition 2020, which sees it open up its archive of full-length talks, which have never been published before and includes talks from Reiulf Ramstad, Francine Houben, Daniel Libeskind, Tatiana Bilbao, Peter Cook, Richard Rogers, Massimiliano Fuksas, Ben van Berkel, and others.

Virtual Design Festival is the world's first online design festival, taking place from 15 April to 30 June. For more information, or to be added to the mailing list, contact us at virtualdesignfestival@dezeen.com. 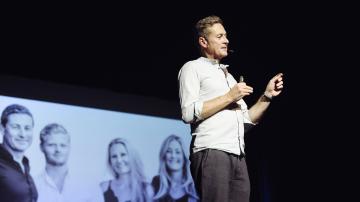