British designer Faye Toogood discusses her unconventional career path and the story of her latest collection in this video interview as part of our ongoing collaboration with Friedman Benda for VDF.

"I always feel like the person that didn't train, that didn't go to the RCA, and didn't know what I was doing," Toogood revealed to curator, Glenn Adamson, in the Design in Dialogue talk.

Dezeen has partnered with New York gallery Friedman Benda to publish a selection of the best conversations with leading creatives from the Design in Dialogue series as part of Virtual Design Festival throughout May and June.

Toogood is best known as the founder of Studio Toogood, whose work spans a diverse range of disciplines including sculpture and fashion. She has a degree in history of art and started her career as an editor for The World of Interiors magazine.

Her interview with Friedman Benda is the second conversation published as part of VDF, during which she discussed how her lack of a traditional design education impacted her direction as a designer.

"I always feel like the fraud in the room"

She also gave an insight into the stories behind some of her past works, such as Assemblage Five, before discussing her latest collection, Assemblage Six: Unlearning, for the first time.

Toogood cites the names of the two furniture collections as examples of her experience of imposter syndrome.

"Someone once asked me why they're called assemblages," Toogood explained.

However, Toogood added that she also believes the word assemblage is a truer reflection of her work and the studio's unique multidisciplinary design approach.

"So I called them assemblages, because that's sort of what I feel I do, I cut and paste and curate, and edit and put things together."

"Having studied the history of art, all those references are there for me to kind of cut and paste and create. It's referenced all in one space."

Studio is a space for "misfits"

Toogood said that her approach to design of "cutting and pasting" different influences is also reflected in the makeup of the team -- referred to by Toogood as The Misfits.

"Along the way I've gathered what I call The Misfits," she explained.

"The group of people have worked either at an architect's firm, as an artist, or as a fashion designer, graphic designer, sculptor, and they've got frustrated working within their environments doing the same thing over and over again."

Overtime, Toogood has developed the studio into a series of spaces for these creatives to escape convention and experiment.

"I wanted to create a space where we could all just play, essentially," she told Adamson. "We have a fashion floor, our tool house, a product floor -- everyone is working on different spaces and using different materials."

"You'll get a coat being painted on one floor and then a clay ball being made on another, and we're doing it all together."

She compared this to the process of running a magazine, another influence of her early career.

"I kind of run it like a magazine, there's different departments, but we're all working on the same thing," said Toogood.

"There's different pages we've all got to get out, there's an issue that's got to be produced, and we know what the theme is for that issue, and we're all on the same on the same trajectory to create it."

The studio's latest collection, entitled Assemblage 6: Unlearning, is a collection of furniture pieces that are larger replicas of rough, playful maquettes that the studio produced at the outset of the project.

This includes a heavy bronze stool that evokes a cardboard box, and a floor light made from resin and canvas that resembles a sculpture made from masking tape.

Assemblage 6 was developed by Toogood to challenge all of the studio's previous work and "unlearn" its typical design process, which involves periods of long and thorough development.

Instead, the collection celebrates the very first moment of creativity and guttural instinct a designer experiences at the beginning of a project.

"I was just desperate to find a geometry that I felt was truly unique and a sense of working that could basically take me over the next few years, that was completely not referential of any work I'd done before," she explained.

"It was just starting again like a child would if you presented them with a roll of sellotape and some cardboard."

According to Toogood, the project is about vulnerability, exposing the studio's creative process in a way that it has not previously, or other designers would not consider.

"For designers to show maquettes is quite personal, it's quite a quite a big reveal," she explained.

"For me, this collection feels very much like it's about vulnerability, I'm really showing and exposing a process here."

Toogood's conversation with Adamson is the second in a series of Friedman Benda's Design in Dialogue talks we are broadcasting as part of Virtual Design Festival.

The first talk was with pioneering architect James Wines, who said that "all cities are becoming exactly alike" and called out for more buildings that "reach out to people". Other designers featured in the series include Ron Arad and Misha Kahn.

All photography is courtesy of Friedman Benda and Faye Toogood. 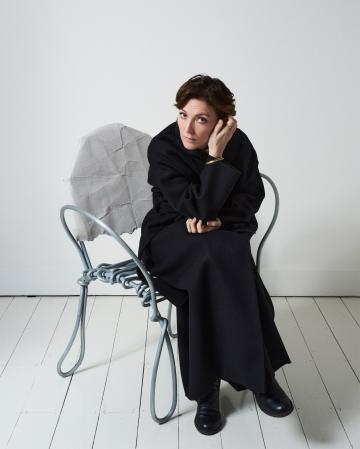