Architects working in Morelia , Mexico are choosing to make bold additions in eye-catching white . Here are five striking projects, including a house punctured by trees and a food market.

White concrete contrasts black granite in this house that HW-Studio has stepped down a sloped site in the city.

Bright finishes continue throughout the interior of the house, called Casa Ja, which has different levels arranged around gardens and patios.

It comprises three white-rendered volumes: two splay towards the rear to enclose a swimming pool, and a third is stacked on top.

Before Casa Ja, HW-Studio designed this food market to replace a warehouse that dated back to the 16th century when it was used as a wine cellar to an adjoining house.

The white volumes create a stark contrast to a number of existing details that the studio maintained like stone walls and steps, arched openings and iron gates.

Casa MK by Roof Arquitectos is fronted by white walls that screen the entrance to a residence and a central courtyard planted with 13 oak trees.

The house is formed by four volumes -- one of which is clad in black granite. Inside, white walls with panoramic openings and glazing frame views of the oak trees as well as the surrounding hilly landscape.

Roof Arquitectos designed Julio Hernandez house as an interplay between white architecture and greenery, as sweetgum trees grow through openings in the concrete slabs.

Slender white columns rise up the two floors of the house, while most of the walls are formed from sliding glass doors. 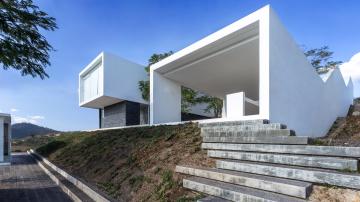