Back in early March, it was announced that the Board of Directors of the School of Architecture at Taliesin ( SOAT ) had turned back a decision it made in January to shut down following a protracted tenancy dispute with the Frank Lloyd Wright Foundation .

In a press release announcing the initial plan to close down, the school wrote: "[SOAT] will cease operations after this semester, after a gut-wrenching decision by its Governing Board [...] The School of Architecture at Taliesin was not able to reach an agreement with the Frank Lloyd Wright Foundation to keep the school open." Taliesin School of Architecture Board votes to rescind planned closure

The school's initial decision to close down came as SOAT struggled to raise additional funds to keep its operations going, a circumstance that changed following the groundswell of sympathy and support the school experienced following the January announcement. In March, for example, when the decision to close the school was rescinded, SOAT's board wrote that "its financial situation is such that it has long-term viability, especially in light of new support that has come forward since January of this year."

It appeared at the time that there was a stalemate between the two groups, with SOAT facing an existential crisis regarding its desire to continue operations while being unable, due to the Frank Lloyd Wright Foundation's antipathy toward signing a new agreement with the school, to do so at Taliesin itself. As part of its plan to allow the Memorandum of Understanding to expire, the Wright Foundation announced that it was launching its own, non-accredited architectural education initiatives, as well.

This month, as the COVID-19 pandemic has swept and transformed academic institutions around the country , a report from The Chronicle for Higher Education sheds a little more light on the school's future situation.

The article, which discusses how struggling higher education institutions are benefiting from the $2.2 trillion CARES Act emergency economic relief package created by the federal government in response to the crisis, includes a few brief comments from Aaron Betsky, the recent director of SOAT, including confirmation from Betsky that SOAT does indeed plan to continue its operations somehow.

The article explains that SOAT is in the process of applying for the CARES funding that has been made available to smaller higher education institutions and that this funding would help to augment the funds that have been raised since the school's future existence came into question.

"If we do receive [CARES funding], it will be split between supporting students and offsetting the costs incurred by recent events," Betsky tells The Chronicle for Higher Education , explaining that the dispute with the Wright Foundation and the COVID-19 crisis have imposed intertwined difficulties for SOAT. 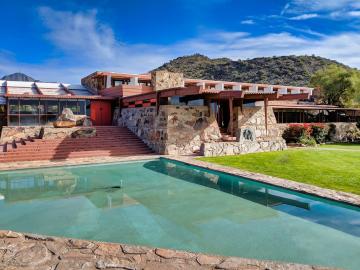