Virtual Design Festival has teamed up with Studio Drift to live stream a special performance of Franchise Freedom, the Amsterdam studio's kinetic artwork comprising hundreds of illuminated drones. Tune in from 9pm UK time to watch it live.

The performance takes place above an undisclosed city on the 75th anniversary of Liberation Day, a public holiday marking the end of Nazi occupation in the Netherlands.

The exact location is being kept secret so that people do not flout social distancing regulations to watch it in person.

First unveiled at Miami art week in 2017, Franchise Freedom comprises 300 illuminated drones that have been programmed to mimic the behaviour of a murmuration of starlings in the sky.

The artwork has previously been performed at Burning Man and at the Kennedy Space Center to mark the 50th anniversary of the moon landing.

The performance tonight, which is supported by arts organisation Mothership, is intended to help replace all the events that would normally take place across the Netherlands to make Liberation Day, but which have been cancelled due to the coronavirus pandemic.

"We're flying Franchise Freedom for the healthcare workers and the people who are suffering from the virus," Studio Drift co-founder Ralph Nauta said. "Unfortunately, art cannot be the solution, but it can create comfort during desperate times."

"We have seen during our previous performances that when people see the artwork together, it unites them," added fellow Studio Drift co-founder Lonneke Gordijn. "They are all looking at the same thing, and feel a part of a collective experience."

Studio Drift, which Nauta and Gordijn founded in 2007, produces experiential sculptures, installations and performances, which often use technology to explore natural phenomena and humans' relationship to nature.

Earlier today, the duo spoke to Dezeen's editor-in-chief Marcus Fairs about their work in one of our live Screentime conversations as part of VDF.

Virtual Design Festival is the world's first online design festival, taking place from 15 April to 30 June. For more information, or to be added to the mailing list, contact us at virtualdesignfestival@dezeen.com. 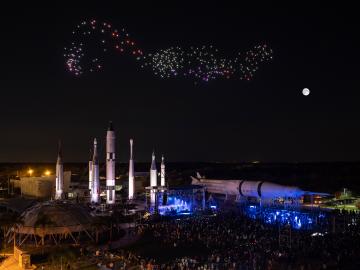