Architect Arthur Mamou-Mani has called for help to turn an installation designed for this year's Burning Man into a virtual experience after the desert festival was cancelled due to coronavirus .

Sharing the design exclusively with Dezeen, he called on people with expertise of working with gaming engines to help him realise the project in a digital space.

"We would like to create an online experience with the project, using features such as 'multi-player' on the game engine Unity to allow people to write or place messages of hope on the structure," he said.

"Burning Man has challenged the community to come up with ideas for a virtual version of the event this August," he added.

"Therefore, similar to Dezeen's Virtual Design Festival , these are opportunities for us architects and artists to re-invent our relationship to space."

"Here is an open call to the community"

Mamou-Mani shared a short film sequence created in gaming engine Unity to demonstrate how the project could be realised digitally.

"We have done the test attached and are constantly exploring but this will take us quite a lot of research as we are not game designers, so here is an open call to the community if you are able to help with this project," he said.

The architect began designing the structure, called Catharsis, while he was in Milan assembling his Conifera installation for fashion brand Cos , which was the most Instagrammed installation during Milan design week in 2019.

"We started working on the design of the project around April 2019, whilst we were in Milan assembling Conifera," Mamou-Mani told Dezeen.

"The project was initiated by Mikolaj Sekutowicz of the Therme Art Programme who experienced Burning Man 2018 and wanted to create a link between the experimentation of Black Rock City and cities around the world."

Mamou-Mani decided to create a project about the city itself and chose to approach the design from a mathematical angle.

"If a city is made of, by and for participants, then what does an amphitheatre even mean?" he said.

"This is the question I asked myself, and then remembered a geometrical figure of a circle made of circles called the Poincaré Disk," Mamou-Mani added. "The circles would increase as they reached the infinite edge of the hyperbolic plane and would exist in a space where curves are shorter than straight lines."

The concept inspired him to create a fractal amphitheatre made of smaller amphitheatres that would offer up infinite possibilities to its users.

"The space in between the circles would rise to the sky and offer labyrinthic galleries for people to place art of any size, allowing for more than just one type of performance, encouraging participation and creativity regardless of backgrounds," he said.

The structure would have been made of wood. "We chose timber for its environmental credentials and because it is so volunteer-friendly, can be adjusted in all kinds of ways on site," the architect added. "We combine it with laser-cut steel plates for strength."

Architect ready to start building when Burning Man was cancelled

It was named by journalist Sophia Swire, who made a film Mamou-Mani's Galaxia temple design for Burning Man 2018 .

"Catharsis is the purgation of emotions experienced through art or any extreme change in emotion that results in renewal and restoration," Mamou-Mani said.

"I think we are all experiencing this now with Covid-19," he added. "At that moment, Catharsis was the transformative overload of perceptions and experiences that Burning Man offers in one week within an extreme environment, the structure was meant to be like a sponge encouraging creativity."

The architect was ready to start building the design when Burning Man was cancelled.

"The biggest challenge for Catharsis was to build a safe structure that could be assembled and disassembled several times," Mamou-Mani said.

"I love this idea: allowing buildings to have several lives, assembled when needed and stored when not, in the spirit of the circular economy. Our studio is in boat containers, so we understand the value of a flexible and modular approach to architecture."

Burning Man structures could be reused for homeless

Burning Man structures are usually burned when the festival ends, like Galaxia, which was the festival's main temple in 2018 and highly commended in our Dezeen Awards 2019.

Mamou-Mani had other plans for Catharsis, which he planned to disassemble and bring to London's Somerset House after the festival to establish a dialogue between cities.

A comment on Mamou-Mani's Instagram , about how he could have built homes for the homeless with the supplies for the structure, led the architect to look into the possibility of working with local councils to make use of future modular designs.

"Reno and SF are shockingly full of homeless, so I can understand the divide that Burning Man can create when knowing the amounts involved in creating a city that disappears instead of investing in our own cities," he said.

"Saying this, the experimentation that Burning Man allows can help invent and test new kinds of modular structures. Imagine if these were donated to cities after the event? Imagine if this was part of new rituals, reconnecting with the homeless community by building with them," he continued.

"I did get in touch with the Tower Hamlets council and am waiting for their reply. We all felt very empowered by fabricating masks for the NHS at our fabrication space FabPub , we all have the power to change things!" Mamou-Mani said.

Some past Burning Man structures include architect John Marx' five-sided pyramid that reimagined the myth of Andromeda and Finnish studio JKMM's sauna for the desert.

This year, Colorado architects Renzo Verbeck and artist Sylvia Adrienne Lisse were to create an eight-pointed angular structure to serve as the temple. 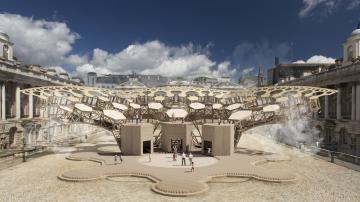