When Clare Pater came across a dated, rundown 1950s property in North West London, she knew that two years of searching for a new home were over. This was her family's perfect new home.

Clare her husband Jake had been searching for a suitable house for two years, and despite this property being in need of complete refurbishment, the couple spotted the potential of the detached four-bedroom property.

The couple wanted to move because of their family's growing needs. However it was important to remain within the area so that their children Amelie, Asher and Ava could remain within close proximity to their school and friends.

Desiring more space and tranquillity -- particularly for Oscar, the family's Labradoodle puppy -- the couple were keen to embark on a new project, having done up their previous house as well.

Both Clare's background as an interior designer for her own company Nova Nilla Design ), and Jake's position as a partner for a commercial property company, provided them with a strong platform for the family to embark on their new house journey.

After purchaser's costs, the Pater family had £50,000 for the house renovation, meaning any plans for an extension were out of the question. Due to the property being over 60 years old and in a dilapidated state, the place needed more than a small paint job including redecoration, a new kitchen and bathrooms.

The home was fully refurbished, with the only structural work being the addition of a doorway into the main living area. To create such a beautiful home brimming with character, Clare's trick was considered spending on most aspects while selecting a few crucial items to splash out on, achieving a stunning living space.

Although they were keen to bring the budget down by hunting for bargains, Clare also selected a handful of essential pieces worth spending money on. If only one roll of wallpaper was needed, for example, she would opt for a top-end product.

She also used cheaper materials to mimic the effect of the more expensive version such as using laminate flooring instead of real wood, as this can get damaged easily, especially with younger kids. Nobody can tell the difference and they managed to save a lot of money.

They added the cornicing which wasn't cheap but it was a must have, as it adds so much character to the house. They also invested in good quality light switches and door handles as these are touched and used so much, and gives the illusion of luxury throughout.

Clare was enamoured with the idea of having a blue kitchen ever since she saw a picture years ago which stuck with her. So when she finally brought this image to life in their house, everyone was surprised and thought they were crazy. It just so happens that now this is a very popular kitchen colour, so Clare was actually ahead of the curve!

'It attracts people instantly as they come in the door and then go straight to the kitchen,' says Clare.

A good quality kitchen was important to her, so she insisted on solid-wood cupboard doors. Not only will they will last for many years, they can be repainted in the future as well. Other indulgences in the kitchen were the quartz worktops, the brass boiling water tap and brass hardware.

Love the colour? Check out our navy kitchen ideas

However, Clare did manage to save money in other ways. By using open shelving -- which she loves -- and using porcelain tiling for a splash back that mimics more expensive marble, Clare reduced her costs.

Another bargain was the French antique chandelier, which offered her an opportunity to inject some extra glamour within the space.

With the project costs needing to stay low, Clare shopped around mainly for second hand items. Finding good quality items at a low cost was no easy task; she hunted across a wide number of stores to find suitable items, to the point where she would spend her entire night shopping online.

Most of the artwork was purchased from either Ebay or charity shops. A marble dining table this size would have been way out of budget, so she had this made from a slab selected from a local marble supplier.

A white backdrop, toile fabric and traditional grey and blue shades give this bedroom a classic and restful feel.

Video Of The Week

In the bathroom , the couple followed their builder's advice and only tiled the areas which needed to be watertight. They used beautiful green marble tiles on one wall in the en suite and the remaining areas were tiled with a cheaper porcelain or ceramic.

Up next: Take a tour of this two-bedroom 1970s terrace in west London, transformed with flea-market finds and foliage

Clare's eye for design and savvy bargain-hunting equipped her with the tools to revive this once derelict property into a vibrant living space which oozes high-end quality for the whole family to enjoy and flourish. 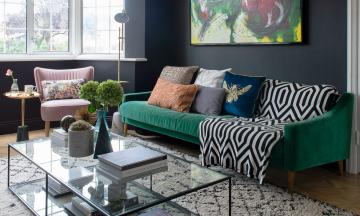