As work on the 1,050-foot-tall 53 West 53 tower designed by Ateliers Jean Nouvel in New York City moves toward completion, crews have made progress installing the multicolored aluminum panel cladding that wraps the tower's stacked pinnacles.

Designed with expressed diagrid structural elements and a sharply tapered form, the tower offers a collection of condominiums ranging in configuration from one to five-bedrooms with the largest units taking up an entire floor of the tower and a series of duplex penthouses capping the building. The penthouse units, according to marketing materials, are accessed via private elevator bays.

A construction photo released to Archinect shows the top levels of the tower nearing completion with each of the three splintered tops wrapped in bronze, black, or silver aluminum panels. Adamson Associates Architects and SLCE Architects are also collaborating on the project. Interior view of the condominium units. Photo courtesy of Stephen Kent Johnson.

The project is developed by Hines, Goldman Sachs Group, and Pontiac Land Group and features interiors designed by interior architect Thierry Despont . Amenities for the tower include a 17,000-square-foot "full-floor Wellness Center" a pair of "large vertical gardens" designed by the French botanist Patrick Blanc. Included also in the project are a 65-foot swimming pool, a fitness center with private training area, sauna, steam rooms, a golf simulator, and squash court, Temperature-controlled wine vaults are also available for purchase, according to the developers.

The tower was initially expected to be completed in 2019 but the design team is now aiming for the project to be delivered sometime in 2020.

The tower, along with the Kohn Pedersen Fox -designed One Vanderbilt tower and the SHoP Architects -designed Steinway Tower , are among a new crop supertall skyscrapers that are nearly completed in New York City that all rise taller than the Empire State Building. 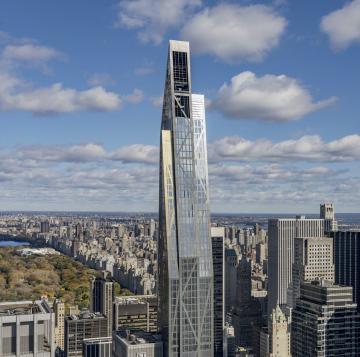