Elliott Architects has designed this barn-like house in the Tyne Valley, England , with double-height living space beneath a steep gable ceiling.

The locally-based practice built the four-bedroom home, called North Bank, on the outskirts of a village in Northumberland .

Despite its rural location, the house sits close to the road and has neighbours on three sides. It's oriented to look out over the Tyne Valley to the north and towards the Pennines to the south.

The form of the house references the nearby landmark-trust owned Causeway House, an old farmhouse with one of few remaining examples of a black thack roof -- the lost art of heather thatch.

While silhouette of the new building mirrors the steep roof pitch of these old structures, thatch roofing has been swapped for a more contemporary zinc finish.

Metal was chosen to reference the nearby 18th-century smelt works.

"The cladding was completed by the clients with locally-source Douglas fir ."

Split across two storeys, half of the ground floor is occupied by a double-height, south-facing living, dining and kitchen area.

The other half, set slightly higher, features a study and a studio space.

Above, two larger bedrooms sit at either end of the home and two smaller ones in the centre, separated by a bathroom.

Square windows along the ground floor and skylights in the steep roof follow the path of the sun throughout the day, with deep internal reveals that create seating areas.

The double-height living area is the focal point of the home. It sits beneath the exposed wooden gable ceiling and is overlooked by an internal window from the bedroom above.

"We wanted to make a form which felt singular in essence, and single storey, rather than feeling distinctly two storey," explained Elliott.

"This connects it to the village hall and chapel barn precedents, but also to the evolution of the homes, where traditionally the upper floors were smaller and functional, just for sleeping, with the added benefit of protection and warmth."

"It was a happy accident; the client wanted to do some of the work themselves so intended to paint, but in order to give them time we left the building with a sealed plaster finish," said Elliott.

"This gives the space a raw feel which perfectly suits the house."

Previous projects by Elliott Architects include another home in Northumberland which also drew on its surroundings for its material choices , with two stacked volumes finished in brick and cedar.

Photography is by Jill Tate . 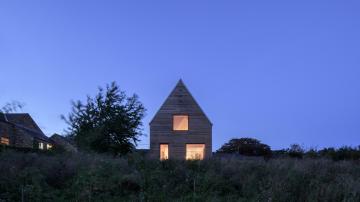