View of the 1111 Hill project. Image courtesy of Doug and Wolf.

A 43-story tower designed by Australian firm Toichi Takada Architects proposed for a site in Downtown Los Angeles has gotten a new look and an updated set of uses.

Initiated by Australian developers Crown Group, the glass-wrapped tower features a domed top with a crown decorated in tree-studded terraces. The Los Angeles Times reports that the project has been redesigned to include a mix of residential and hotel units, a shift from what initially proposed as an all-residential development several years ago. Overall view of the tower. Image courtesy of Doug and Wolf.

The copper-colored tower is inspired, according to the architects, by California Redwood trees. It will feature a 160-room hotel, as well as 319 condominiums. The base of the tower is marked by a multi-story parking podium wrapped in vertical panels. These areas, as well as the building's rooftop terraces, are shown covered in greenery in renderings for the project. Rendering showing the tower's ground floor canopy. Image courtesy of Doug and Wolf.

The ground floor is also marked by an undulating canopy that extends over the sidewalk and the building's retail spaces. MVE + Partners is acting as the Architect of Record for the project. Despite the crashing economy, anticipated demand for new residential units "at all price points" will remain strong due to overall low supply, Stuart Gabriel, director of UCLA Ziman Center for Real Estate tells The Los Angeles Times.

The developers are moving ahead with obtaining final planning approvals for the project and anticipate to begin construction by late 2021. The project is set to be completed in 2025. 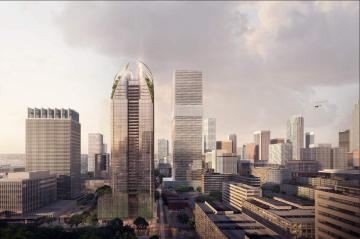