The coronavirus pandemic has highlighted the issues with housing in New York City that must be addressed following the crisis, according to architects in the city.

As people self-isolate in their homes to reduce the spread of Covid-19, private outdoor areas have become invaluable spaces for people to safely get fresh air. But, according to Nathan Rich, co-founder of local architecture studio PRO , many living in New York's public housing don't have access to such areas.

"Access to outdoor space is obviously more relevant now than ever before, especially for lower-income residents," Rich told Dezeen.

"Almost none of the more than 400,000 public housing residents in New York City, for example, have any kind of access to outdoor space from their apartments," he added.

"The coronavirus crisis is absolutely revealing needs and inequities in New York City housing that we should be thinking about."

Rich's studio PRO has been designing case studies for the public housing authority in New York , known as NYCHA. The studio has proposed adding balconies onto existing public housing towers to enhance the lives of tenants.

He said the update could also extend the life of the buildings, many of which have not been renovated since they were built in the 1940s.

"The balconies could better insulate the ageing brick facades, while providing a place for localised heating/cooling condensers," said Rich. "Residents would have private outdoor space that would simultaneously bring far more sunlight and air to the apartment interiors."

"The lessons from the virus are immediately self-evident"

The problem is also not limited to public housing. According to the latest American Housing Survey, as reported by the New York Daily News , nearly 80 per cent of people that live in the city's housing complexes with over five residences don't have access to a "porch, deck, balcony or patio" from their apartment.

Eric Chen, the founder of New York architecture firm ODA , said that providing outdoor spaces has also been overlooked in city developments, which aim to make the most of little space.

"The lessons from the virus are immediately self-evident to architects who have been striving for these things, against the tides of developers and the bottom line, for so long," he said.

"There must be a better way to arrange our homes in our increasingly dense cities where we can enjoy our privacy while acknowledging our neighbours, where we can all access outdoor spaces and feel the sunshine on our face."

Chen believes that the prevalence of high-rises and penthouses throughout the city, which has turned "isolation into a status symbol", should also be reconsidered.

"It's time to look at more successful typologies to reconnect society"

"The social housing experiment of the 1950s and 60s created a new architectural typology, which was compounded by an underlying social construct, driven by capitalism, that told us to mind our own business," he explained.

"Somehow, during the age of high rises that followed, turned this idea of isolation into a status symbol, as private penthouses, accessed by private elevators, today float high above the city streets."

Chen argues that it will also take "more than a balcony" to create the necessary changes to New York housing. He cites examples in European cities, where apartment buildings often wrap around a block and have a hollow space at their core for communal gardens.

"It's time to look at more successful typologies to reconnect society," he said. "In 2020, as the wave of Covid-19 subsides, I believe it will be a greater need for intimacy within communities."

David Brown, principal of the New York office of international firm Woods Bagot , said the pandemic called on architects to come with "creative solutions" to adapt urban apartments, many of which are being hacked by their residents.

"For those of us still dedicated to the socially sustainable project of the high-density, mixed-use city, we will have to reimagine creative solutions to the economic and spatial inequalities this crisis has surfaced to bring dignity and amenity to small urban apartments."

Woods Bagot has already developed a modular system that adapts apartments to make them better suited for working at home because of coronavirus.

Brown added that as New Yorkers realise the danger and difficulty of city living, and adjust to working remotely, they could rethink their urban life entirely.

"It remains to be seen if this crisis will make society rethink its relationship to urbanity -- we are learning to work remote and potentially raising fears of density, proximity and public transit," he said.

Photograph is courtesy of Shutterstock. 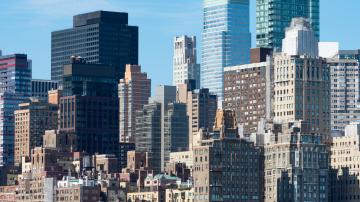