The United States Army Corps of Engineers this week issued Southwest Valley Constructors a contract modification worth $524 million for design-build services on a barrier wall replacement project in Tucson, Arizona, at the border between the U.S. and Mexico. The change brings Southwest's contract amount for the project to almost $1.2 billion when combined with the May 2019 initial contract's award of $646 million for the same project.

While construction of all non-essential projects in several US states has been ordered to stop to contain the spread of COVID-19, planning of fortification elements along the US-Mexican border near Tucson, Arizona is going ahead with full steam, as Construction Dive reports.

Similar articles on Archinect that may interest you... 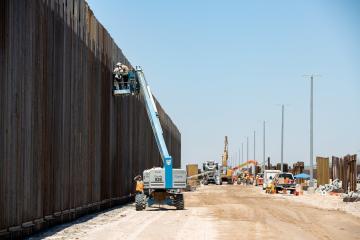