Dezeen promotion: the Axia collection from Australian brand Phoenix is a set of ultra-thin minimalist taps for architecture fans.

Available in finishes including chrome, matte, black and brushed nickel, the taps are a "fresh take on modern minimalism" according to the tapware and bathroom accessories brand.

"Our challenge was how to achieve a 6.5-millimetre-high super lean outlet through a one-piece casting," said Phoenix senior designer Ban Liu.

"This results in a strong signature of machined in detail with a precision control aesthetic," added Liu.

The wall-mounted tap, which breaks away from traditional tap design, is the highlight of the Axia collection.

Designed to appeal to architecture fans, the long, thin spout cantilevers out from a slim metal fixture. Its tap handle sits to one side on a diagonal.

The mixer tap handles have an outer dial that rotates around a fixed central face. Temperature is indicated by two fine lines, one blue and one red, at a 45 degree angle to each other.

For bathtubs, the wall set can also come without the diagonal tap handle. Wall handles are available separately, and a single large dial can act as a handle for a shower.

There are no levers on the basin mixer from the Axia collection. Instead, the single dial tap is placed on top, completing the slim cylindrical column.

Axia has won several design accolades, including a 2020 Red Dot Award as well winning Best of the Best, a 2020 iF Design Award and a Good Design Award.

Phoenix was founded in Australia in 1989 by Brian Wansbrough, and came under new management in 2005. Its other collections include Radii, which has minimal, cross-shaped taps with lowercase sans serif "hot and cold" etched on one tine.

For more information about the Axia collection by Phoenix, visit the brand's website. 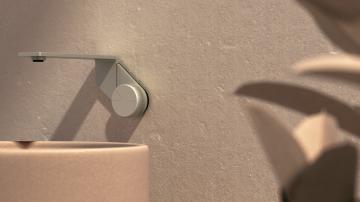