Architecture firm Morphosis has designed a building with slanted walls for the headquarters of athletic clothing brand Lululemon in Vancouver , Canada.

The project, known as the Store Support Centre, will serve as the corporate home for Lululemon , which was founded in the city in 1998 by Chip Wilson.

Renderings show the building will have slanted walls that angle both inwards and outwards. A portion of the structure will be at a lower height and have a garden on its roof.

Rising 13-storeys at its highest point, the Store Support Centre will have a brise-soleil system with blades on its exterior to limit solar heat gain.

A focal point of the design is a large oval cut into the facade that is filled with greenery. The area will accommodate an atrium that will allow natural light inside the building.

Stairs will wrap around the atrium to connect each office level. Retail spaces will be at the ground level with floor-to-ceiling windows, which join a plaza and outdoor areas.

Lululemon's Store Support Centre will be built in Vancouver's False Creek Flats industrial area that is east of downtown. Also located here, which is known as the Flats, is Emily Carr University of Art \& Design by Diamond Schmitt Architects joined by a red pavilion by Perkins+Will .

The Lululemon headquarters will be erected on a corner lot on the southwest corner of Foley and Great Northern Way. It will be more than double in size than Lululemon's current office in waterfront neighbourhood Kitsilano.

"We are thrilled to be partnering with Lululemon on this project and joining them at an important time in the evolution of the company," said Morphosis founder Thom Mayne .

"We are incredibly excited about the next chapter of our story both globally and in our hometown of Vancouver," added Susan Gelinas, senior vice president at Lululemon.

Morphosis was founded in 1972 by Pritzker Prize-winning architect Mayne and has offices in Los Angeles, New York, Shanghai and Seoul. Other projects by the firm are a D-shaped building in Los Angeles and a 62-storey skyscraper in Shenzhen, China .

Images are by Morphosis. 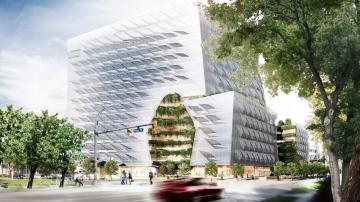