, that will make up the development.

Currently under construction on the Greenwich Peninsula in London, the one-hectare design district being developed by

will contain workspaces and workshops aimed at creative companies.

In total eight architects have designed the 16 new buildings that will make up the Greenwich Design District alongside the RSH+P-designed O2 events arena, which was originally called the Millennium Dome.

Each architecture studio designed two buildings on the site, without knowing what the others were designing, with the aim of creating a development with a wide variety of styles. Eight architecture studios, including David Kohn Architects, have design buildings for the Design District 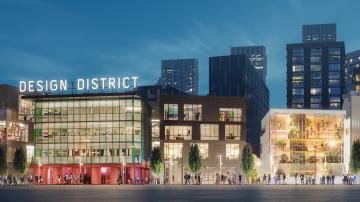