Today it was announced that Aaron Betsky has been named the new director of Virginia Tech's School of Architecture + Design ( named #6 on our list of Top Most Admired Undergraduate Architecture Programs ). The appointment follows the news of Betsky's resignation, planned for spring 2020, as president of the School of Architecture at Taliesin (SoAT). Founded by Frank Lloyd Wright, the institution has been mired in controversy since news of its potential closure ---a decision that has now, possibly, been reversed ---broke earlier this year.

Betsky spoke to RECORD, calling Virginia Tech "a visionary school with visionary leadership," citing "the cross disciplinary work we're doing at Taliesin, with an emphasis on learning by doing and our design build program," as experience he hopes to bring with him to the new program.

Above all, he says, he hopes architectural program graduates learn, "how to look, how to be aware of where you are, and to figure out how you can make what you've become aware of better in every sense of the word in terms of sustainability, social justice, and openness to all in terms of beauty."

Betsky's predecessor, Hunter Pittman, will return to Virginia Tech in a teaching capacity as an associate professor in both the undergraduate and graduate programs. 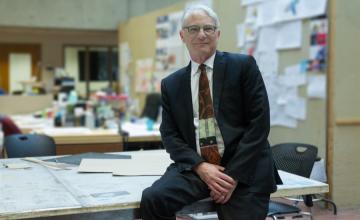