Casa Malaparte is a pink thumb in the Mediterranean, once described by AD as a "ravishing" "minimalist plinth of a house." Built in 1942 by Curzio Malaparte (née Kurt Erich Suckert), Casa Malaparte is the redundant result of a life in exile; after being banished by Mussolini in 1933, Malaparte (the man) felt compelled to take his solitude one step further, or rather, right up to the edge of a plot of land overlooking the Tyrrhenian Sea. The house was designed, from floor plan to furniture, by Malaparte himself --- once and forever a true renegade.

This month, a special exhibition at Gagosian's Davies Street gallery in London will see the space arranged to resemble Casa Malaparte's main room, a stone-floored space with ocean vistas that features in Jean-Luc Godard's 1963 film, Contempt. Tommaso Rositani Suckert, Malaparte's youngest descendant, has produced editions of three of the most iconic furniture pieces from Casa Malaparte for the exhibition: a table, a bench, and a console, all manufactured in Italy and comprised of solid walnut, pine, Carrara marble, and stone. To complement the furniture, a suite of Baroque-styled porcelain pieces formerly owned by Malaparte will also be on view; by juxtaposing familiar motifs from Italy's classical past with minimalistic modern forms, the show hopes to pay homage to the life and spirit of one of the Italian avant-garde's most provocative figures. 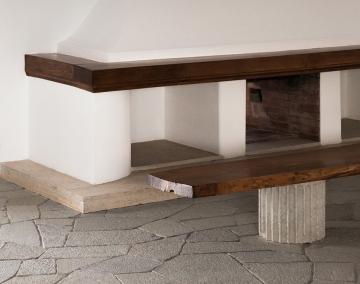