School of Architecture at Taliesin Now Aims to Remain Open

Uncertainty seems to be the only constant for the future of Frank Lloyd Wright 's architecture school.

Established in 1932, the School of Architecture (SoAT) at Taliesin evolved from a residential apprenticeship program called the Taliesin Fellowship to an accredited three-year graduate institution. For some 80 years, the SoAT has operated between Taliesin, Wright's 800-acre family homestead near Spring Green, Wisconsin, and Taliesin West, a second campus established in Scottsdale, Arizona, in 1937. (Both properties were inscribed to the UNESCO World Heritage list last summer, along with six other Wright buildings.) Taliesin in Spring Green, Wisconsin, photo by Andrew Pielage

But on January 25, in a decision that shocked the architectural community , the Board of Directors voted to close the School , citing an inability to reach an agreement with the Frank Lloyd Wright Foundation, a separate organization that has stewardship of the Taliesin properties. (The two became independent entities in 2017, after the Higher Learning Commission decreed that the school could no longer be an accredited institution while under the auspices of the Foundation.) The Foundation quickly responded to the School's statement, placing the onus of the decision on the SoAT. As RECORD previously reported , the Foundation's vice president of communication and partnerships at the foundation, Jeff Goodman, told the magazine that "the School has consistently failed to meet projections for enrollment, philanthropy, and earned revenues."

The announcement prompted swift and significant outcry from the architectural community, as RECORD has reported . But on Thursday March 5, the website Archinect published a story stating that the School's Board of Directors had voted to rescind its vote to close the SoAT, citing the outcry of students, and also new funding that has been secured since January---support that the Board says, in a statement it shared with RECORD late last week, provides "long-term viability" to the school.

The Foundation, however, tells RECORD that it has "little information about these new income sources and programs, which remain to be vetted by the School's accreditors, its lawyers, and its own finance committee"---despite having two representatives on the board. "Questions also remain about the School's leadership, in light of the departure of the current dean/president later this Spring, and how that impacts the direction of a revised program," continues the Foundation's statement. (Aaron Betsky, who came on as dean of the SoAT in 2015 and helped raise $2 million for its independence, announced his plan to resign at the end of the Spring 2020 semester.)

The SoAT Board has called on the Foundation to extend its existing agreement, but says that "the Foundation is being resistant and still retains the power to force the School to close unless a deal is reached." In a statement sent to RECORD, Dan Schweiker, chair of the SoAT's Board of Governors, says, "It would be a severe blow to the future of architecture if these talented students would not have the chance to continue this legacy."

The Foundation, for its part, says that it will have no further response or statement until evaluations of the School's proposal have been completed; in the meantime, it will continue to explore how partnerships with existing M.Arch. programs might allow for the creation of accredited programs on the properties.

"It is imperative if the Foundation allows for the use of Taliesin and Taliesin West by any independent organization, that the work that will occur on these two campuses, each part of a UNESCO World Heritage site, reflect both financial soundness and professional programmatic content that can advance the legacy of Frank Lloyd Wright," writes the Foundation.

Check back for updates on this evolving story. 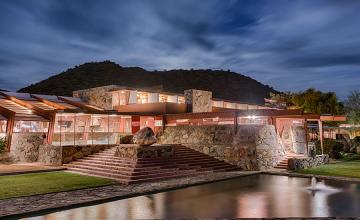