We suppose this will be our last time covering the "spring art fairs" in New York: This week, the Armory announced that it would be shifting its fair schedule to September --- and moving from the Piers to the Javits Center --- and we'd expect that the other shows will soon follow suit. It was just one of many anything-goes, let's-throw-out-the-book moments of last week, as everyone comes to terms with the threat of Coronavirus; there were almost as many Purell dispensers as there were paintings at the shows.

Design, and its attendant signs of domestic life, played an even more outsized role than normal at the fairs, it seemed; at Independent, the booth furniture often threatened to drown out the works themselves, as with the ombré pieces on view at Peres Projects, or the erstwhile neon pink RO/LU benches at Parker Gallery. There was also a crossover between Object \& Thing and Independent, which featured some of our favorite designers, like Thaddeus Wolfe, James Shaw, and Philippe Malouin. The best booth of the week by far, though, was by the London-based gallery Lyndsey Ingram, who handed over its design and curation to painter Georgie Hopton. Hopton tapped her husband Gary Hume to share the joint booth at the Armory, then kitted it out like a real home, making rugs and curtains for the event and adding ruffles as a delicate baseboard to anchor the color-blocked walls. If "home" is the safest place to be right now, we certainly understand the desire to carry it with you wherever you go --- even to an art fair. 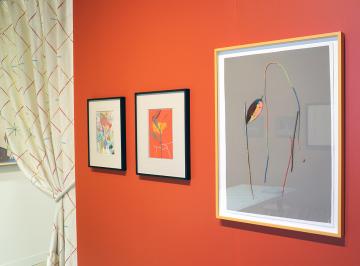