The owners moved to the village from London 15 years ago, looking for a better way of life for their children. 'We had friends in the area, and it was perfect because there were good schools nearby and it was commutable for my husband's job,' says the owner.

'We rented until we found this cottage, which belonged to friends of my sister. The appeal was instant because it's so pretty.'

'The cottage had been extended over the years -- it's like a Tardis as it's bigger inside than it looks from the outside. We adored the original features such as the windows and beams, and the kitchen had a lovely cosy feel. The proportions of the rooms were good, too.

'We also liked that it was situated in a lovely village with a nice pub, a tennis club and lots of families around. It was in a conservation area, but it wasn't listed. It ticked all our boxes.'

The owners loved the property and its position, but the layout was a different matter. They decided to live in the house for a while until they figured out what they needed to do.

Three years later, in search of inspiration, the owner decided to do a one-day interior design course with Stephanie Dunning of Dunning \& Everard . It helped her realise that there was too much work for her to do to the cottage on her own and she enlisted Stephanie's help to rework the ground floor.

Stephanie also created a new link that connected the main cottage to the utility , wine store and study, and redesigned these rooms, knocking down walls and incorporating lots of cupboard space.

She then redecorated all the ground floor, basing the choice of fabrics around the owner's love of old French linens, faded florals and muted colours.

Floor-length curtains add a soft elegance to the French doors in the hallway linking the main cottage to the utility and study, while the soothing neutral shades of the living room are warmed up with cosy-hued patterned fabrics. 'I was delighted with the end result downstairs,' says the owner.

A long table bought at a French brocante creates a focal point between the kitchen and utility and study.

The windows were kept treatment-free to let in light. Blue units add a modern touch.

Related: Navy kitchen ideas -- to add an element of rich colour and sophistication

With its welcoming fire, this room is the perfect place to relax.

Stephanie was brought on board to make the most of the space and instantly came up with some clever ideas, including moving the staircase.

'You had to walk through an unused area to get to the stairs,' says Stephanie. 'By turning the staircase around, we gave the family another room, so they now use it as a TV room.'

A modular sofa layered with cushions and sheepskins is a comfy spot to unwind.

In 2018, the owner decided she wanted to complete the renovations for the rest of the house. 'The children were now grown up, so it was a good opportunity to redo upstairs,' she says. 'It was a confined space and we wanted to make better use of it.'

Stephanie was called in again to reorganise the first and second floors.

'The house hadn't been divided up intelligently,' says Stephanie. 'There were five bedrooms and two inadequate bathrooms with little storage. We redesigned the whole of the rear first floor, knocking down all the walls at the back.'

One of the bedrooms was enlarged, making a single into a double; an extra shower room was created and the two bathrooms became one larger one; and another shower en suite was added.

This guest room features a smoky green-blue palette, with a checked tweed headboard creating a cosy focal point. The headboard is upholstered in Bossington Check Duck Egg B02, Teasel England, made by Dunning \& Everard.

Florals, checks and an Indian-inspired throw evoke an eclectic look. The walls are painted in Hardwick White by Farrow \& Ball. For similar antique chairs, try Vinterior.

Tongue-and-groove panelling and shutters add to the rustic feel.

Inspiration for the decor was taken from Pinterest and magazines, and Stephanie created an eclectic English cottage look. 'We interpret what the client likes and push the boundaries just that little bit more,' says Stephanie. Existing Colefax linen curtains in the guest room were the starting point for this scheme.

Ready for another house tour? Take a turn around this idyllic converted barn in the Yorkshire Dales

Video Of The Week

'We were delighted with the end result,' says the owner. 'The changes absolutely transformed the upstairs of the house. We couldn't believe how Stephanie managed to get so much into such a small space -- the cottage feels so much bigger.' 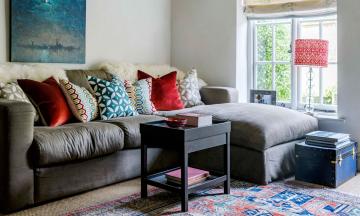