When people ask us how we find our story subjects, we typically rattle off a list of the usual suspects --- Instagram, email submissions, design and art fairs, friends of friends, and, decreasingly, Internet rabbit holes. (Do cool, unknown blogs even exist anymore?) But recently, I discovered a new favorite artist in a (very) old favorite publication: The Brooklyn sculptor Dave Hardy is the cover star --- and the subject of an 18-page portfolio --- in the winter issue of The Paris Review . Of course, The Paris Review has always featured an artist on its cover, but past subjects have typically leaned toward the two-dimensional --- a painting of swimmers by Geoff McFetridge, a drawing of a dog by Raymond Pettibon, a photograph of bodies in water by Massimo Vitali. In fact, says TPR art editor Charlotte Strick, "Hardy's is the first sculpture to grace our covers in my tenure as art editor and designer of The Paris Review. There is perhaps some risk involved with non-figurative covers, but for me, Hardy's "Mountain" (2014) brings with it all the energy and emotion that a human body might too convey."

Strick --- who also is a co-principal of the Brooklyn design firm Strick \& Williams --- originally came across Hardy's work on --- you guessed it --- Instagram, but she initially assumed he was based in Europe rather than in her own Brooklyn backyard. A few DMs later, she arranged a studio visit, and the story was born: "His works, many taller than you or I, are unlikely marriages of foam, cement, slivers of glass, and other found objects. Precise, linear indentations remain where panes of glass once sought to divide otherwise undulating forms. These monochromatic curves may also be punctuated with a single, upright No. 2 pencil (or even a pretzel stick!) --- now serving a higher geometric purpose." Most of Hardy's works involve foam, sometimes left in its pliable natural state and sometimes hardened with cement, and yes, in a favorite piece, a precarious totem is weighted by a sandbag and ascends to the sky via a scaffold of pretzel sticks. Scroll through for some of our favorite spreads and sculptures, and click here to purchase the issue to see the whole portfolio, with accompanying text by Elena Passarello. 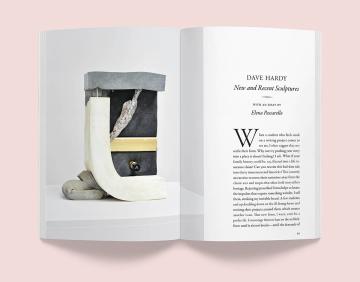