SXSW 2020 cancelled in Austin due to coronavirus concerns

According to a statement released by SXSW today, the City of Austin has cancelled the March dates for SXSW and SXSW EDU. Initially scheduled to occur from March 13 to March 22, this is the first time in 34 years that the conference has been canceled.

"We are devastated to share this news with you. 'The show must go on"'is in our DNA, and this is the first time in 34 years that the March event will not take place. We are now working through the ramifications of this unprecedented situation," SXSW said in a statement.

A decision drawn from concerns of the coronavirus, just two days ago, Austin Public Health said that "there is no evidence that the closure will make the community safer," but SXSW says it will "honor and respect the City of Austin's decision." Harvard Square Kiosk by CultureHouse. Via CultureHouse Facebook page

In the world of architecture, one of the more popular happenings at SXSW is the Place By Design competition which "aims to showcase innovative and invigorating design in the public sphere where urbanists, artists, architects, and designers have the opportunity to present their scalable solutions for improving our shared landscape." 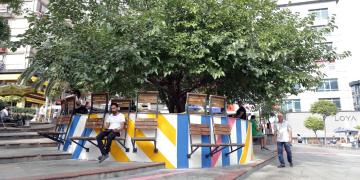